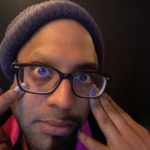 Navi is no stranger to this competition, having won VPC 4 as the producer for Helephino, and participating in three VPCs as a vocalist (2, 3 & 6), and judging VPC 5. Navi’s a non-binary Sri Lankan-American, and a multidisplinary creative, which is a long winded way of saying they like to make all sorts of shit.

Navi is oldcore, and has been involved in the Nerdcore Extended Universe since the early days of Rhyme Torrents. They’ve produced and released several albums in that time, including their most recent album “NAVID-19” in March of 2020. Additionally, Navi was just hired as an Artistic Lead with Flying V, a pop/nerd culture performing arts company based in the Washington DC area.