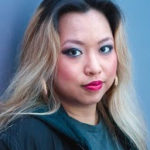 Shubzilla is a rapper based out of Renton, WA. No stranger to the stage, Shubzilla turned to rap as a creative outlet after years of training as a dancer. She is one half of Shubzilla x Bill Beats (guess which half) and has worked and collaborated with MegaRan, K-Murdock, Ardamus, Prowess The Testament, Sammus, Lex The Lexicon Artist, Kadesh Flow, Klopfenpop, and many others. Shubzilla x Bill Beats have also performed at SXSW, MAGfest mainstage, MAGWest, and Nerdcore Dayz.

Currently, Shubzilla streams gaming, music making and reviews on Twitch. She and Bill Beats have livestreamed sets for shows such as The Four-Eyed Horsemen, Live From Home, and Otacon 2020.

Shubzilla is a co-founder of The Nerdy People of Color Collective, a group of nerds of color who promote diversity and inclusion in geek and nerd spaces. She is also a co-founder and a staff member for GeekGirlCon, a Seattle-based non-profit organization, which holds a two-day annual event.

With Bill Beats and the rest of the NOIR GRIME family (Terry Monstrosity and MyndThaVillain), she is the co-host of the Seattle branch of “The Friday Night Get Down,” a monthly event showcasing talent local to the Pacific-Northwest at Cafe Red.